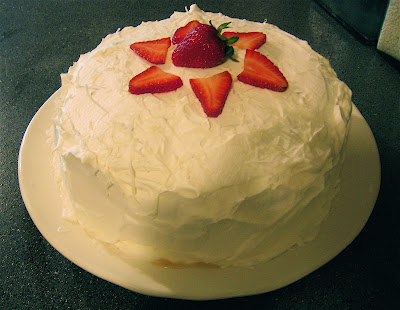 This was a birthday present to a dear friend. It may seem odd, gifting food which won't last past the day it is given---but, what is better? It may be easier to grab a book or something, but that doesn't require the investment of hours of your time. And it is definitely not as satisfying as producing something with your own hands. I like to give food because it is thoughtful and personal and won't clutter up a person's house after you are done. Besides, if all goes according to plan, the memory of your gift will probably last longer than some trinket anyway.

This cake came together as a cross between techniques from my Dona Tomas cookbook, multiple online resources and my own tweaking.

The Cake
Cajeta
The Sauce and Fillings
The Assembly
* The cake part of this recipe can be substituted with any white cake that is spongy enough to soak up the milk, but strong enough to hold up and not become too soggy. I've read online that boxed white cake mix works well and cuts down on the time involved.