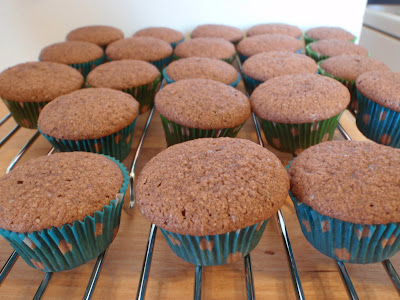 There are so many recipes I want to post, and so little time. However, I thought I could squeak this one up here, since I found time to bake a batch of these before going to work today. It was also a good excuse to use my new mini muffin tin, they are so adorable! Plus, you can have more than just one :-) These little cupcakes are delicious on their own without frosting, or you can be decadent and frost with chai cream cheese frosting. They remind me of my favorite drink from Peet's Coffee - chai latte with two pumps of chocolate!
What's in them
1 C flour (can use half unbleached, half whole wheat)
1/4 C cocoa powder (unsweetened)
1/4 C instant chai tea powder (Trader Joe's has it)
1 tsp baking powder
1/4 tsp salt
1/2 C melted butter (1 stick)
3/4 C sugar
2 eggs
1/3 C milk
1/2 tsp vanilla
How it's made
Pre-heat oven to 350 degrees. Line mini muffin pan with paper liners.
In a small mixing bowl, whisk together first 5 ingredients (all dry ingredients). Set aside.
In a large mixing bowl, cream together sugar and butter, at least a minute, until white and fluffy. Add eggs then milk and vanilla.
Slowly add dry ingredients to wet and mix until just combined.
Spoon batter into muffin tin, about a tablespoon each - don't be afraid to fill until just the top. Bake 12-15 minutes until a toothpick inserted comes out clean or with just a couple crumbs. Cool on rack. Frost if desired.
Optional frosting:
Cream together 3/4 C soft cream cheese, 1/4 C chai powder, 1/4C powder sugar. Use cocoa powder for garnish if desired.
Posted by amber at 11:03 AM No comments: 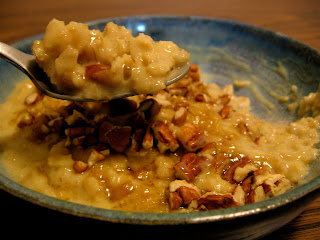 Teaching fifth grade is exhausting. And time consuming. I don't have much time left over to cook, let alone post blogs. Besides all that, my best friend and (RFL's co-creator) got married (!), so as you can imagine, we've been a little preoccupied.

I still make oatmeal every day, though, and I still think this is the best way to do it. SO, now that the weather is getting cooler, I wanted to re-post and update this recipe with the hope that you will give it a try sooner or later. I swear by it.

Thanks for your patience. I hope to be back in the kitchen soon!
___

Before this, I'd always made my oatmeal the same way. The standard way. Old fashioned rolled oats, stirred into boiling water, cook, add toppings. It's good that way, and why mess with a good thing?

I know you are probably skeptical. It took me three or four months from the time I read about this oatmeal to the day I finally decided to try it. Hopefully it won't take you that long.


Creamiest Oatmeal Ever
~Print Recipe~
Serves 1
VARIATION: BANANA NUT OATMEAL:
Add vanilla and cinnamon, then add one mashed banana--the kind that have turned extra ripe/brown that you keep in the freezer for banana bread. (Defrost it first in the microwave.) After everything is mixed in and hot again, take the oatmeal off the heat and add the egg. Serve with brown sugar and pecans. Mark said it was the best oatmeal he's ever had!
Posted by Alexis at 8:58 PM 1 comment: