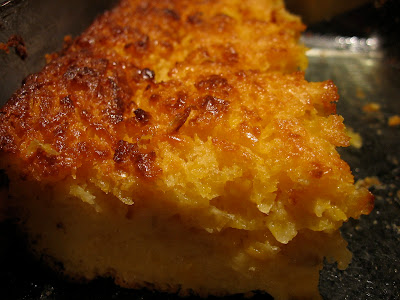 The time: summer 2000. The place: a leafy neighborhood in Mexico City. The food: pan de elote.

It can be a little hard to think all the way back to when I was 17 years old and first ventured into a foreign country. But it is not hard to remember how my friend bought a slice of this tasty treat from an old lady seated at a folding table in the middle of a mercado sobre ruedas--something like a Mexico City version of a farmer's market. As we wound our way through the narrow aisles, between stalls cluttered high and low with everything from fresh produce to beauty products and brooms, Giovanna stopped me and handed me a slice of this pastry. 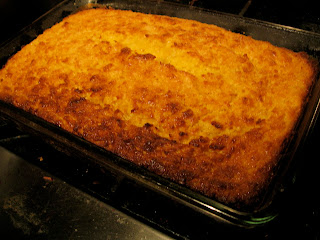 I had never even heard of  pan de elote (which somewhat misleadingly translates as corn bread), let alone tasted it. Elote? I thought to myself, isn't corn suppose to be called maiz? But as soon as I took my first bite I had an overwhelming feeling that this was something familiar, something I'd had long ago. I really can't explain it--I guess I don't need to, but I might just have to have another slice while I try to figure it out.

Pan de elote is a sweet (but not too sweet), dense, rich "bread." That's in quotation marks because there is very little flour in this bread, and there are lots of eggs which make it creamy and custard-y. There is no corn meal, just blended, fresh corn kernels--which give it a delectably toothsome texture. When it bakes, it turns a deep caramelized brown at the edges, and that is definitely the best part. Pan de elote is not your average corn bread. It is something special. I have not found anything like this in the United States. I did come across a recipe online once, but when I tried to make it, I ended up with something like corn pudding--nothing like the pan de elote I'd eaten all those years ago. 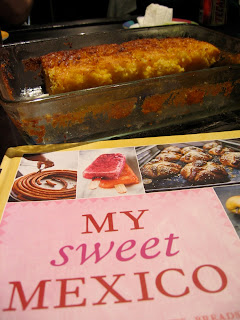 This recipe comes from My Sweet Mexico, one of the latest and greatest additions to my cookbook collection. The author, the pastry chef Fany Gerson, is a graduate of the Culinary Institute of America and a veteran of three-Michelin star restaurants. She spent years traveling around her native Mexico collecting the best dessert recipes she could find. You have no idea!

Pan de elote is among them. And thank god for that. This easy recipe captures the sweet corn essence of that first slice all those summers ago. Though this version is slightly richer and more custard-like than I remember, I am definitely not complaining.

Try pan de elote as a morning pastry with a cup of hot coffee or a glass of cold milk. Eat a slice as a snack or even as dessert. Warning: eating pan de elote may cause you to relive past adventures in Mexico. Even if you have never been to that lovely country, eating this you might experience a pleasant sensation of deja vu. You'll see. 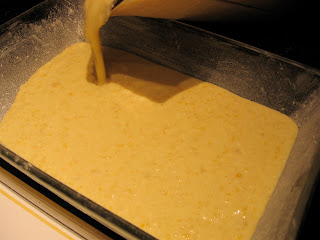