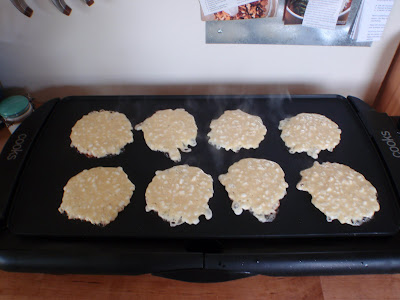 These special pancakes were a weekend morning staple when I was growing up. My mom Becky is a pro at cooking them, and after some practice in my younger years, I was able to whip up a decent batch as well. The best part of these pancakes is not the texture or flavor (both of which are super delicious), but the topping. These pancakes must and should be topped with butter and cinnamon sugar, no questions asked. So, now you can eat them guilt free. If you need a change from your typical floury pancakes (think Bisquick), then I highly recommend you try these protein-packed cakes one morning (or evening!). I should warn you they are a little temperamental and will take a batch or two to get the hang of, so don't get discouraged if they don't turn out cooked quite right the first time.
I'd also like to stand on my soap box for a minute longer to tout the glories of the electric griddle - it took me about 10 minutes to cook a full batch of pancakes, getting them all done in two rounds. Plus, heat control is a breeze. Invest in one if you haven't already. If you get the $20 version at Target, it will work! If you invest more money in one, check the coils to see if it will provide even heating.
Speaking of a full batch of pancakes, this batch of cottage cheese pancakes feeds two hungry adults. 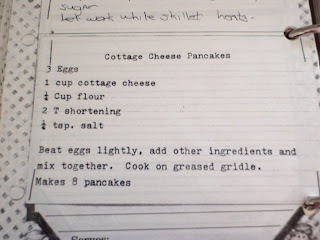 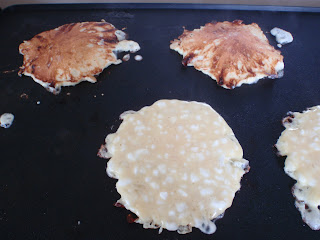 How it's made
Preheat griddle to 350 degrees. Beat eggs lightly and add remaining ingredients. Beat until combined.
Pour batter onto griddle or frying pan, about 1/4C for each pancake. Flip once the top of each pancake is no longer glossy (it will also turn a bit more yellow). Cook on other side until firm.
This will take some practice, since it is fairly easy to burn them if the griddle is too hot, or to flip them too early if the griddle is too cool. So be patient and keep a close eye on them.
To make the cinnamon sugar, in a small bowl or container, pour about 1/4C sugar and shake in a bunch of cinnamon (you've found out my dirty secret - I never, ever measure cinnamon, no matter what.) I would guess it's about 1 tsp cinnamon to each 1/4C sugar. Mix sugar and cinnamon until well combined - if it's in a container then just shake until combined.
Serve pancakes topped with butter and cinnamon sugar mixture.
Posted by amber at 9:45 AM