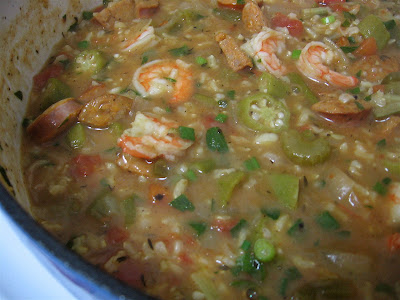 I usually don't think much about gumbo, but lately it's been on my mind. Mark and I happened upon a little jazz bar/restaurant last week and on a whim we decided to stop in. It was happy hour, so we each ordered a pint of a Washington state unfiltered pale ale and some food. I got half of a turkey sandwich (it was mediocre) and a cup of soup. Except instead of soup, I asked if I could have the gumbo. Our waitress didn't see why not, and soon enough she sat it down in front of me.

Maybe it's because I didn't have much by the way of expectations, but this gumbo took me by surprise. As soon as I had a bite, I regretted not ordering a huge bowl of the stuff. It was thick and hearty, with big chunks of tender chicken and spicy andouille sausage. Softened okra, onions and bell peppers mingled with rice to form a perfect savory creole stew. By the time I had a few bites and shared some with Mark, it was almost gone! I lingered over the remaining spoonfuls, savoring the flavors for as long as I could.

I immediately decided to make some gumbo, so I could get my fix. I scoured my cookbooks and googled away. I found a few different versions and took what I liked from each one. Traditionally, gumbo starts with a roux. One recipe called for a cup of oil, into which you stirred a cup of flour and then let it brown. I decided to skip this step (and the calories), though I did not want to sacrifice flavor. 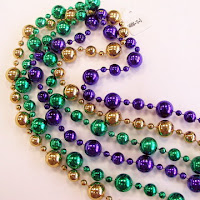 I was not disappointed. This version combines the best ingredients from the various recipes I came across. If I were to do it again, I would include chicken--either instead of, or in addition to, the shrimp. I used some flour to thicken the broth, but it wasn't quite as thick as I wanted it, so I added a little cornstarch, too. You could use either one, both, or neither, depending on how you like it.

Mardi Gras is March 8th, so you might as well put some beads on and whip up a pot of gumbo to celebrate! Mmmm, my favorite kind of celebration.


Sausage and Shrimp Gumbo
~Print Recipe~
Posted by Alexis at 7:00 AM