I've always loved okra, but it also always intimidated me. I found a really nice looking batch at the San Francisco Tuesday Ferry Building Farmer's Market last week and decided to finally give it a go. Not too bad! Delicious, actually! I was afraid that it would come out gooey and sloppy, but since this recipe asks that you cut it in thin lengthwise slices and deep fry the heck out of it, it turned out fine.

This dish went really well with our dinner that night: Israeli Cous Cous (not really cous cous, more like balls of yummy pasta) and a Moroccan beef stew that our friends made in their crockpot. I can't really describe the taste, because if I tried, it would sound gross: imagine deep fried okra in pico de gallo with an Indian twist?

The original recipe can be found here, but I changed the main spice (from chaat masala to garam masala and used far less of it)

In small mixing bowl, stir together onion, tomato, and cilantro. Refrigerate until ready to use.

Email ThisBlogThis!Share to TwitterShare to FacebookShare to Pinterest
Labels: okra 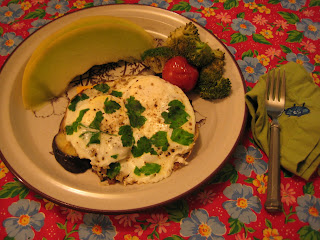 Tonight I had a little competition (by myself), Iron Chef style. I realized I had a bunch of really gorgeous produce and no idea what to do with it all before it went bad. So I made up a few things, and tried a few things for the first time, and it came out pretty darn good. This is apparently what happens when I have to cook by myself. If you live within a one mile radius of me, you've probably realized I hate cooking and eating by myself, so this was a fun alternative. The only thing missing was Alton Brown's narrative.

Secret Ingredient: Eggplant
Optional Ingredients: Onion, egg, bread, cheese, parsley, broccoli, potatoes, tomatoes, yogurt, honeydew melon, peaches, pears, vinaigrette, salt and pepper
The Theme: Layering
Timeline: 30 minutes
Play-by-play:
I started by washing and slicing the eggplant in thick slices, then salting it heavily to rest - because that's what Michelle says to do with eggplant.
Then I pre-heated the oven to 400 degrees, washed the chopped broccoli, and placed it in a baking dish with the tomatoes from my garden. I tossed with vinaigrette and salt and pepper with dill. Once heated, I baked for 20 minutes.
I sliced and plated the honeydew.
I preheated my George Foreman Grill. Once heated, I grilled the eggplant tossed in vinaigrette and pepper. (I should have sliced them thicker for the GFG to work better.)
I heated my mini cast iron skillet and melted butter. I added the chopped onions I had chopped a few days ago, and sauteed them. Then I added two eggs on top, sunnysideup style, sprinkled with salt and pepper, and topped with parsley. Covered with lid and let cook/bake for 5 minutes. Then sliced cheddar cheese.
Once everything was done cooking, I plated two slices of eggplant, topped them with the sliced cheese, and added the onion/egg/parsley on top - which melted the cheese. Broccoli and tomatoes went on the side with the honeydew. It was all very delicious, and felt complete, since everything was cooked so differently (raw fruit - roasted veggies - grilled eggplant and baked egg). The eggplant was the most surprising, it turned out fabulous in the GFG.
Posted by amber at 8:58 PM No comments: 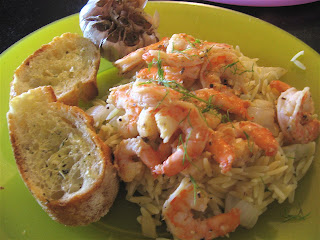 I've been meaning to post recipes over the last couple of months, but I've been quite busy--managing a business, moving apartments, going to my brother's wedding and such. I've been nearly too busy to cook, but still I find a way. Somehow. It's good stress relief to do something you enjoy---which for me is definitely the cooking, but especially the eating!

Mark and I made this awhile ago. I really wanted to make something with orzo, and I was interested in cooking with fennel---two ingredients I've never used. I cobbled some recipes from Gourmet together and came up with this tasty dish! Super easy and satisfying comfort food.
Fennel Orzo
Serve with Parmesan toasts and roasted garlic!
Posted by Alexis at 7:11 PM 3 comments: 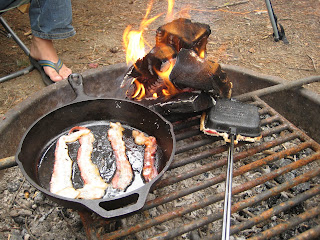 Hobo Pies are the best camping treat you can make, even better than s'mores.  They are very versatile; you can make them on a grill or campfire, at home or camping.  Rossillini first taught us about Hobo Pies on an A's Spring Training trip five years ago.  He grew up making hobo pies when he lived in Ohio.  Over the last five years we have created some hobo masterpieces with many groups of friends.
So what exactly is a hobo pie?  It starts with a cooking iron, or what we like to call a hobo pie maker.  This can be used directly in a campfire, or on top of a grill or stove.  It's best to preheat the maker before using it.  Then, you would butter or spray with oil each side of the iron on the inside, to prevent sticking.  If you're going for a 'pie' style hobo, next comes two pieces of cheap white bread pressed into either side of the irons.  Then put in your filling (see below), and close the maker and cook over heat until bread is toasty brown.  They are a bit messy, so if sharing with a group around the campfire, it's best practice to take a bite and pass it along.
The best part about hobo pies are they are incredibly versatile.  You can pretty much cook anything you have laying around in one.  Here are some ideas below for the different types of styles of hobos - you can use any combination of ingredients depending on taste and style. Recently I had an epiphany that it's basically just like Raclette, just a different style.  That opened up so many more possibilities. 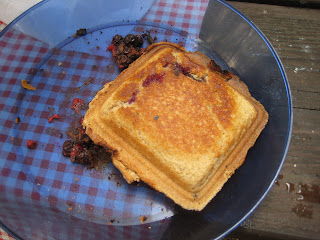 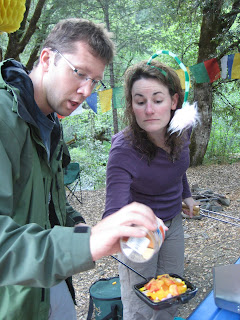 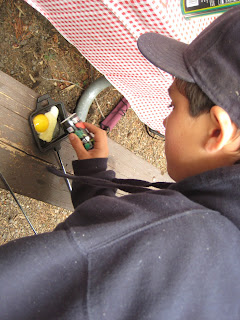 Breakfast Egg Pie:
(hobo pie makers make the best eggs on the planet! I make them at home all the time.)
bread for one side of the maker (served on bottom) or no bread
egg
cheese
onion and veggies
salt and pepper
Posted by amber at 10:29 AM 2 comments: