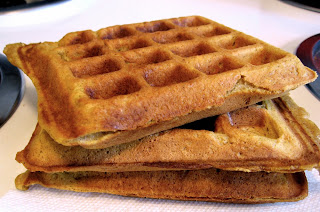 Ok, I guess it's that time of year---I have pumpkin on the brain. I know that pumpkin scones are good and the pumpkin chocolate chip cupcakes in Vegan Cupcakes Take Over the World are amazing. So, when I saw this recipe for pumpkin waffles on Smitten Kitchen, I knew I had to try it. Waffles and pumpkin? Two things I love come together here in a very delicious way. These waffles are sweet and decadent---kind of like eating dessert for breakfast, which is just fine by me. 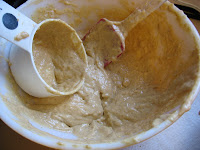 I suggest adding chocolate chips to individual waffles by dropping the chips onto the batter just after you put in the waffle iron, then covering them lightly with more batter. I also recommend adding chocolate chips as a topping like Amber does (one chip in each square). These waffles would be fantastic with whipped cream. I had peanut butter, pumpkin butter, Greek yogurt and maple syrup, but with these you can pretty much get away with plain, too. You can also save any extra waffles by wrapping them in twos in plastic wrap and then storing them in a freezer bag in your freezer for a few weeks.  The next time you want waffles, grab two and pop them in the toaster. Way better than Eggo. 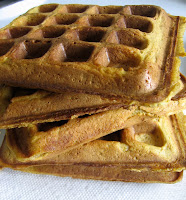 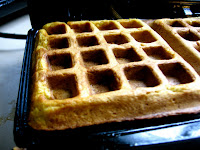