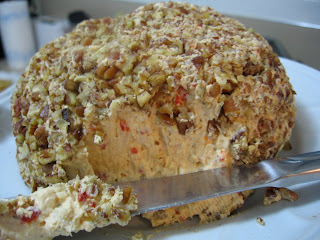 That's right, I said it: cheese ball. Mmmm hmmm. It may not look like the most appealing thing ever, but think about it--who doesn't like cheese? (Any and all cheese-haters can leave right now, thank you.) I believe the premise stands that if you take a bunch of ingredients that taste wonderful alone and you mix them all together and coat them with toasted pecans, the result is destined to taste good. There's just no arguing with that logic--it's iron clad, I tell you.

And so it was. I needed an hors d'oeurve-type dish for a small gathering on New Year's Eve and I happened to come across two different recipes for this dish in my pile of recipe clippings. Apparently, the idea of a cheese ball had been percolating for some time. Well over a year, in fact--I first discovered the delights of this cheese ball phenomenon before a Thanksgiving dinner in 2008, compliments of my dear friend Jesse Kaminski. It was savory and addicting. And better than a dip any day. I'm pretty sure I asked for the recipe back then, but Jesse made me wait.

As I was perusing my recipe cut outs (from The Oregonian and Bon Appetit), I decided what I really wanted to serve was Jesse Kaminski's cheese ball. So I asked for the recipe--and voila! In five minutes time, it was in my inbox. Jesse Kaminski saved the day, or at least my cheese ball. Thank you, Jesse!

What follows is my interpretation of the Original Jesse Kaminski Cheese Ball, allowing for some adjustments around ingredient availablity and other sources' suggestions: