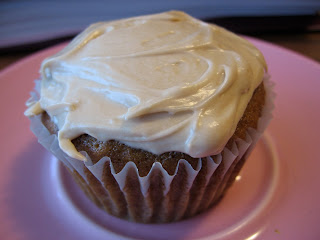 The first time I made these cupcakes, people went crazy for them. They likened them to maple bar donuts and gobbled them up. When I made them this time, I had been doing homework all night and didn't have time to do the sugared walnuts. Then I forgot to double the recipe so there would be enough cupcakes for everyone in my class. I tried a vegan maple cream cheese frosting, but it didn't turn out as well as the buttercream I used in the recipe below. But, I did at least take a photo this time! You'll just have to imagine the fancy sugared walnut on top.
_____________________
Re-post from recipe archives, originally from 12/21/08

There are a number of vegans in my life and they have happily introduced me to the art of vegan baking. Up until a few years ago, I'd been under the impression that 'vegan' automatically meant no tasty desserts. Oh, how very wrong I was.

My friend Audra lent me and Natalie a snazzy little book called Vegan Cupcakes Take Over the World. Between the two of us, we've made a nice array of delicious cupcakes--and people are definitely surprised to find out they are vegan.

I've had numerous people tell me that the little treats from this book are the best cupcakes that they've eaten--ever. But this recipe in particular really takes the cake...

Vegan Maple Cupcakes
~Print Recipe~
For the Sugared Walnuts:
For the Cupcakes: