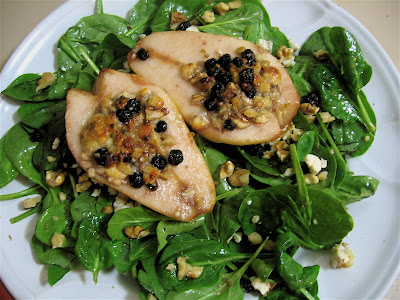 Ever have a recipe that you know you want to make, but it takes you a little while to actually get around to making it? Ever have one that took you two years to finally make? Well, this is mine.

I first saw this recipe while I was at the gym. I've mentioned before that watching the Food Network was basically my main reason for going to the gym. (I don't have cable, OK?!) If my timing was wrong, I'd get stuck with Paula Deen or Sandra Lee. But if the stars aligned in my favor, I'd get to watch Ina Garten's show, The Barefoot Contessa.

Ina's recipes always look delicious and she seems like she'd be a sweet person to have as a next door neighbor. So there I was one day, all sweaty and whatnot, and Ina comes on and makes this wonderful looking pear salad. It's got blue cheese and walnuts and dried cranberries, and all manor of delicious ingredients. And it doesn't look hard to make. I put it on my mental list of recipes I really want to try. 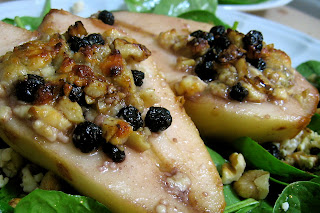 Subsequently, I went so far as to bookmark the recipe on my laptop. It languished there for two whole years. I never forgot about this recipe, but somehow I never went out of my way to get the ingredients, either. Then last week, somehow after all this time, it happened.

Pears were on sale at my normal supermarket, so I bought two. Later, on a whim, I stopped at a Grocery Outlet--which by the way has an excellent cheese selection if you didn't already know. I got a big hunk of blue cheese for next to nothing. I knew I had nuts and cranberries on hand. This was finally coming together! I picked up some spinach and lemons and I was ready to go.

Or so I thought. As I started making this salad, I realized that I used up my dried cranberries making some cookies recently. I dug around and found some dried blueberries--sometimes you have just have to substitute. Then I got to the part about apple cider, which I never have on hand and forgot to buy. "Oh man, I really blew it now," I thought. Just when I thought I had it! I was trying to come up with something I could use in place of apple cider...

when Mark reminded me that I randomly happened to have some on hand, probably for the first time ever. I am working in a fifth grade class and after their Christmas party we had extra Martinelli's left over. The teacher gave me a bottle. I had completely forgotten about it. But there it was in my refrigerator--a veritable Christmas miracle, if you ask me!

Long story not-so short, this recipe finally came together (in adapted form) two years after it initially piqued my interest. It was oh so worth the wait.


Roasted Pear Salad with Blue Cheese and Walnuts
~Print Recipe~
Serves 2 as a main course or 4 as an appetizer
Posted by Alexis at 6:25 PM