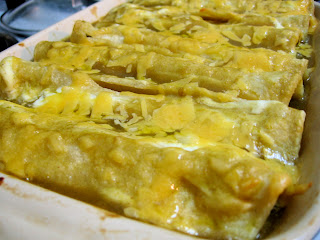 I made these enchiladas to drop off for our friends who just had a baby. Enchiladas are great because they aren't very labor intensive and you can make them ahead of time. (And who doesn't love a gooey cheese-y comfort food dish at this time of year.) Done and done. I went to look up this recipe and realized that there were no photos posted, so I took a couple and added them here. I figured I would re-post this 2009 recipe while I was at it. We'll call it a belated día de los muertos post...
___________________________________________________________________________
Living in Mexico, this was easily one of my top five dishes to order. (Which, if you have ever been to Mexico, you'll know that's really saying something. So much good food!) As far as I'm concerned, enchiladas suizas are without a doubt the best enchilada out there. Creamy, cheesy chicken and green chile sauce? Yes, please. And just so you know, it would be nearly sacrilegious to make enchiladas with flour tortillas. (In fact, corn is always best, in my not-so-humble opinion.)

This recipe is a variation on one I found about five years ago in the San Francisco Chronicle Food Section. The woman who wrote it got the recipe from the family running the bed and breakfast where she stayed. The original version calls for making the salsa verde from scratch, but I didn't want to spend all day on this and just used canned green enchilada sauce. Some brands are better than others, and while I've yet to do a brand by brand taste test, I know that El Pato, Las Palmas and La Victoria are decent.

(If you are wondering, the word suiza, surprisingly enough, means Swiss. Apparently Swiss immigrants in Mexico often ended up making cheeses and other dairy products, like the crema Mexicana in this dish.) 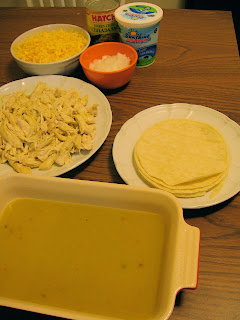