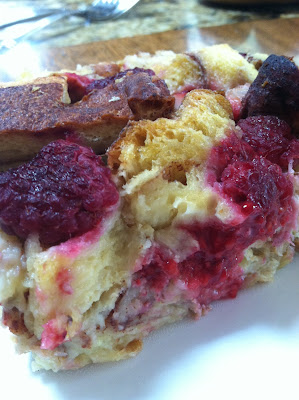 We love French Toast - Andy makes the best French Toast, and his secret ingredient is Semifreddis Cinnamon Swirl bread (Semifreddis is a Bay Area bakery, but TJ's carries it in some locations). I never though anything could top Andy's French Toast, until my Mom found this amazing recipe for French Toast casserole. She made it for mother's day brunch, and it was sooo delicious. I have since made it myself, and it is ridiculously easy to make. I did it half asleep the night before at 10pm. It took all of 5 minutes. The casserole soaks overnight, resulting in delicious a french toast / bread pudding hybrid. Yum. 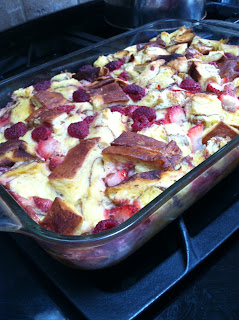 How it's made
Spray a 9x11" baking pan. Cut loaf of bread into 1" cubes and put in pan. Whisk eggs, milk and cinnamon in a bowl, and pour over bread. I smushed everything down with a spatula after, to fill in the gaps. Cover and put in fridge to soak overnight. The next morning bake 45 minutes at 350 degrees. Serve with warm syrup, fruit and powdered sugar.
Posted by amber at 10:13 AM