Orecchiette with Sausage and Roasted Peppers 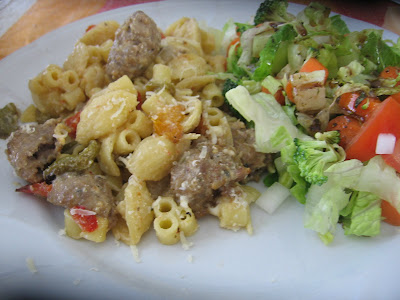 Ok, here's another one adapted from the Great Food Fast book from Everyday Food. Apparently they really do have a lot of good recipes, although this actually asks you to roast your own peppers---not something I would consider particularly fast. (And when I say fast, I'm thinking along the lines of black bean tacos--open a can of beans, heat some tortillas, add cheese and salsa....)

Anyway, I'd never actually roasted my own bell peppers, so this was a fun experiment. It is incredibly easy (if not exactly quick) and I would recommend it to anyone. Roasted peppers have such a wonderful flavor! I feel like they would be a good addition to just about anything. AND it just sounds fancy. I think you will impress people (or at least people who've not roasted their own peppers before).

The onions and ricotta are my own additions. I made a pasta recipe that called for ricotta cheese recently, so I had it in the fridge. I've been adding it to all of my pasta dishes now, and it's such an easy (and low calorie) way to make any sauce creamy! And, as far as I'm concerned, creamy is almost always better than not creamy. Give it a try---be creative!

Also, orecchiette (or-reh-key-EH-tay) is my new favorite pasta. (The shape! They way they hold the sauce!) I've been hoarding recipes that call for it. I didn't see them available at my local supermarket, but I found some (organic and really expensive) at Whole Foods.

Orecchiette with Sausage and Roasted Peppers
~PRINT RECIPE~
Posted by Alexis at 9:29 AM