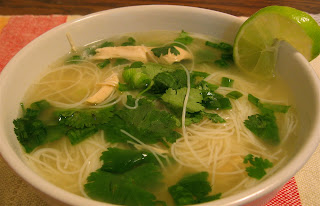 I've been stowing my slow-cooker safely in the cupboard for about 2 years. I keep intending to use it---don't get me wrong, I like the idea of throwing some stuff in a pot and coming home after work to a hot and tasty meal just as much as the next person. But somehow I never put it together.

I have been scoping out slow-cooker cookbooks for over a year. Either they are too expensive or they include too many recipes that I wouldn't actual make, so I put off buying one. Then I found the new WW Slow Cook It. It got the price tag to usable recipe ratio right, so I brought it home.

This noodle recipe was the first we attempted out of the book. (Mark actually made it!) The basic recipe is comforting, but kinda plain. But that's ok with me, it leaves a good canvas for decorating with other flavors. We enjoyed adding some hoisin and a dash of habanero hot sauce in addition to the suggested green onion, cilantro and lime juice. Sriracha would probably be good, too. This soup can go which ever direction you want to take it!