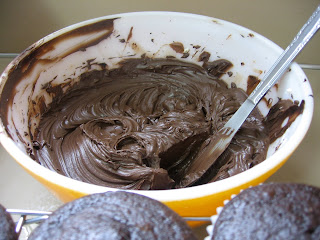 I have to admit I'm a little disappointed with the Martha Stewart's Cupcakes cookbook. I've only tried two recipes, but the results have been merely mediocre. I'm a huge fan of her Cookies cookbook, from which I've probably made 20 different cookies that all came out fantastically, so I had high expectations.  I thought Martha was like the gold standard for these types of things...
Maybe it's me. Maybe I don't love cupcakes as much as I love cookies. I don't know. But, so far, the only thing that has impressed me about the Cupcakes book has been this frosting recipe. I LOVE cream cheese frosting, and you know butter cream is ok, but I've never come across a frosting recipe like this. Cocoa powder AND tons of melted chocolate (ok, lots of butter, too.) But I like the idea of a melted-chocolate-based frosting. It tastes just like you'd think it would--very chocolate-y. It is definitely important to use your favorite high quality chocolate here.
I halved the following recipe when I made my chocolate mint cupcakes, because this will give you 5 cups of frosting. Which is fine---if you are feeding a small army. I also added pure mint extract as I was mixing in the chocolates at the end. I'd imagine any other complimentary flavor would work well here, too. Coconut? Almond? Mmmm. I haven't completely given up on Martha's cupcakes. Yet. I'm willing to give the Cookies and Cream Cheesecake cupcakes a try. 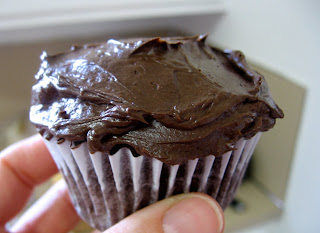 Dark Chocolate Frosting
~Print Recipe~
*If not using immediately, frosting can be refrigerated up to 5 day, or frozen up to 1 month. Before using again, bring to room temp. then beat on low until smooth.