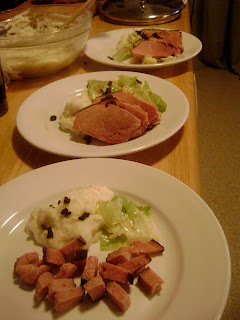 I was watching the Food Network last week and got inspired to make something Irishy for the 17th.  This is what I made, adapted from Bobby Flay's Taste of Ireland show.

It's a rustic slab of ham, sauteed cabbage and creamy mashed potatoes!

It turns out I've never cooked a ham. My family just wasn't traditional-Americana that way. We did goose, duck, lamb or mussels for the holidays. We never ate a ham. But I bought a ham the other day. I really didn't know which one to get and I didn't think it would make that big of a difference because I didn't have high expectations for this meal (ham dinners have always been bland and boring to me).

I bought a smoked ham and brought it home. What made it's way into our mouths might be a new all time favorite meal. 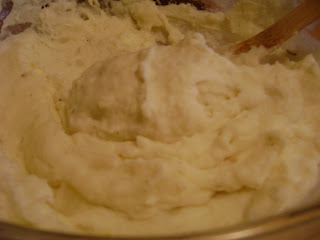 Cover potatoes with water in a large pot and a good dash of salt. Boil until soft all the way through. While the potatoes are boiling, place garlic, olive oil, rosemary, pinch of salt in a foil pouch and bake at 350 for 10-15 minutes. When the potatoes are done, drain and place in a large bowl. Add roasted garlic and rosemary, cream cheese, butter and milk. Mash and mix until creamy but don't over mix. Cover and set aside. 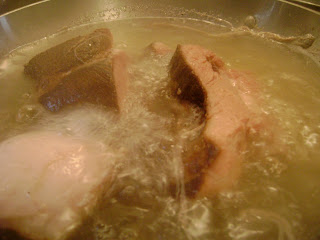 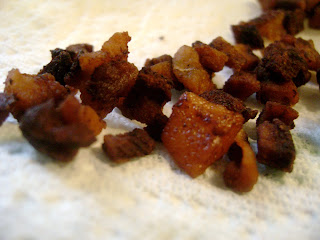 Ham:
-A big fat smoke cured ham on the bone.

I cut a big portion off and boiled it until the meat read 160 degrees in the fattest part. I cut off a big chunk of fat off the remaining ham and trimmed the smoked layer off so I had pork fat, pure and simple. I chopped the fat into little cubes and fried it. I did not really plan this, it just happened. But seriously, who wouldn't fry up the little bits when presented with the opportunity? After a few minutes they were all browned and crispy. I drained them and set them on a paper towel. So yummy!

When the ham meat was ready I removed the slab and sliced it up and put it back in the hot water to hold until I plated.

(I put the remaining ham in the oven to bake/roast for an hour at 350 degrees. I will cube most of it and freeze it for quiche and soups.) 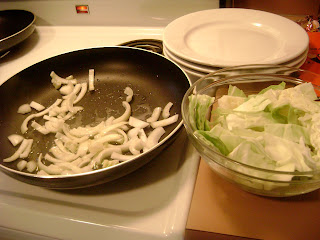 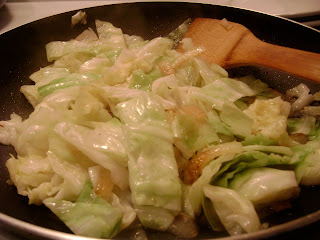 In a large saute pan heat oil and caramelize onions slowly. Add cabbage, toss to coat with oil, add wine and liquid, cover and cook for 4-5 minutes. Toss cabbage around and make sure that it cooks evenly but serve it while it's a little al dente.

I put everything together and it was AMAZING!!!! But I think many things can be amazing when cooked with bacon fats and crispy bits. 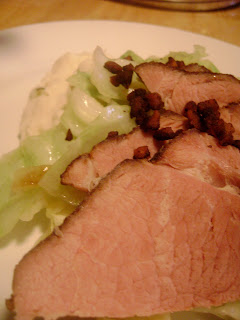 I seasoned everything with salt and pepper as I went, but when we got to the table nothing more was needed.