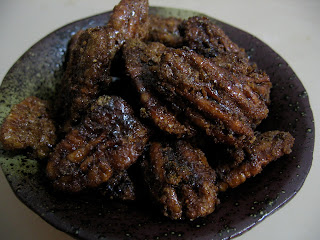 On a whim one night not long ago, Mark and I invited some friends over for dinner. After the four of us finished off some homemade chips and slurped down the last of our tortilla soup, I realized I hadn't thought at all about dessert. While we were sitting at the table finishing some Pacificos, I flipped through my hodge podge recipe books--scraps I've cut out and collected from anywhere and everywhere. I was hoping to find something I could whip together quickly with ingredients I had on hand. Apparently most of the recipes I cut out are a little bit more on the elaborate side: almond-macaroon torte with chocolate frosting and orange compote, milk chocolate souffles with nougat whip, roasted pear tarte tatin with brown sugar-balsamic swirl ice cream (?!). Not going to happen.

I started with the most recent recipes and began flipping back to the beginning. Just before I gave up, I found a recipe for candied espresso walnuts. I had enough on hand to make it work---well, I subbed the pecans for the walnuts, obviously, but pecans are way better than walnuts anyway. That night I cut the recipe from 4 cups to 1 cup and made a few other adjustments. I threw this together in a grand total of about 15 minutes. One of our guests didn't even realize that I'd made them!


Candied Pecans
~Print Recipe~
Can be made up to 2 weeks ahead and stored in an airtight container at room temperature.
Makes 2 cups.
Posted by Alexis at 9:19 PM