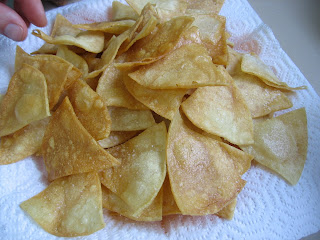 This is one of those things that is really simple and mind-blowingly delicious, but that most people don't (or at least I didn't) think to do. About a year ago, I bought a lovely cookbook from a hip and tasty Mexican restaurant called Tacubaya on Berkeley's famous 4th Street. Part of why I compulsively bought the book were the enticing photos and sleek design, but Tacubaya's food also happens to be fantastic and authentically Mexican (not so many Mexican restaurants actually are). 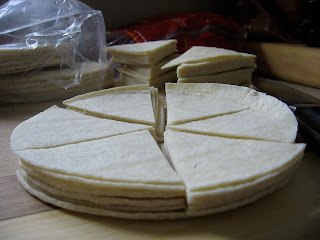 One of my favorite Mexican dishes, chilaquiles, has a base of fried corn tortilla chips or totopos. I couldn't wait to make chilaquiles of my very own (I hope you've had the opportunity to try them and know why), so the totopos were the first recipe I attempted. Now, I have to tell you that I am afraid of frying anything. My family never fried foods when I was growing up and I had never personally attempted to fry anything, ever.

I found that this was actually nothing to fear. And while it's cheap and easy to buy corn tortilla chips at the store, this only takes a few minutes and is more worth it than I could have ever imagined. 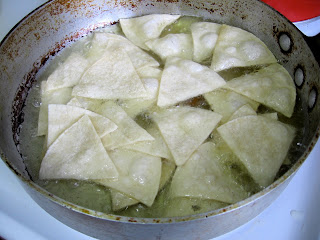 These would be a fantastic appetizer as is or served with salsa and guacamole. The best chilaquiles I've ever had were made with these chips, and I've made a delicious plate of nachos with them as well.
Posted by Alexis at 12:54 PM