I never liked potato salad much as a kid until I had my grandmas. All potato salad was kind of sweet or too mustardy or too mushy. Then at a family reunion of sorts when I was 11 or 12 I tried hers. It did not have sweet relish or mustard in it. And as for the mushy, I was able to get past that because of the first two omissions. About 15 years later I developed my own recipe for potato salad that I love. Today, while finishing off the last bit left over from a recent BBQ* I realized this is an easy one to post and share. Please forgive me as the only bits I had left for a picture were practically traces in my NS "bowl." 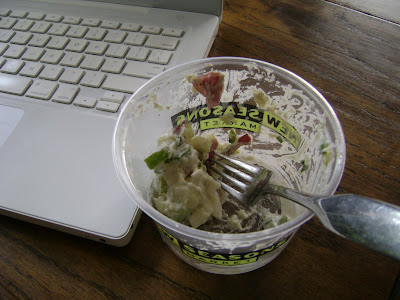 In order to remedy the mushy part I use red potatoes. They are a little more waxy than russets and hold their form a little better. Here is how I make it:

First, chop the potatoes into small cubes, about 3/4" x 3/4" -ish. Then boil them until they are just soft enough to stick with a fork. Not mushy! But rather, just cooked, firm but not crunchy. Drain and rinse with cold water. Set aside to cool. (Sometimes I spread them out on a pan and put in the frig.)

While the poatoes are cooking, chop the celery - slicing it length-wise frist and then into little pieces. I even chop up the leafy parts on top. Chop onions into little pieces as well and add to a large bowl. Finally, chop olives. I like to cut them into quarters the long way. It's pretty, but you can chop them however you want.

When the potatoes are cooled add all ingredients to a large bowl and toss with mayo. Add more or less mayo depending on your style. It's best if this can sit for an hour or so in the frig before you serve it, but it's really good anytime.

*Ramon is coaching me on BBQ, which I recently learned is different from grilling. More to come on that in the next months.

**Vegenaise is a great way to make this dish vegan if you're interested or have friends who you want to impress. Grapeseed Vegenaise is my favorite.

***If you don't own a pepper mill, now is the time! Fresh pepper makes everything better (even sweets I've recently discovered). If you're using the pre-ground stuff you might was well leave it out. It's stale and bland. Fresh ground pepper is amazing and SO worth it.
Posted by Kate at 1:48 PM