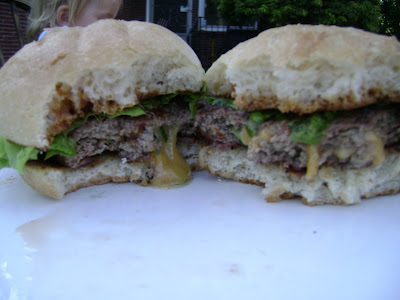 I might start rating my recipes by how many "mm-mmm's" the food gets from John. This just happened to be a 5. Growing up my dad would make stuffed burgers from time to time. Dave is known to order them at McMenamins. So I thought it was my turn to give them a try. This is what I did:

First, I bought just over a pound of the 20% fat ground beef from New Seasons. I know 20% fat sounds like a lot when you see it next to the 10% or 5%, but when you're dealing with grilled burgers it equates to grilled goodness.

Second, I cut a large yogurt container so I was left with a two-inch ring measuring from the rim. This is the form I used to mold the burgers. They actually make a tool for this you can buy for $20...or you can make your own.

Thirds - I like to make 1/3 pound burgers..when you're dealing with 20% fat meat a good portion of the meat melts away and the 1/3 lb burger is actually just right. Separate the 1/3 lb portions into halves.

Fourth, press one half of the meat into the mold. Make sure to really work it into the entire space. This will make sure your burger holds together when you cook it. I usually flip it and then press it in again. Once you've done this, with the meat still in the mold, sprinkle finely chopped fillings (cheddar cheese, green onions, red onions, blue cheese, mushrooms, sundried tomatoes, etc. what ever suits you). Then free-form the second half of the meat into a disk and place it over the other meat and toppings in the mold. Kind of like a top pice crust.

Fifth, press the top all around and work specifically around the edges. Flip it over, use mold again, and do a final pressing. If you don't press it well enough you run the risk of the burger splitting open on the grill and loosing your fillings and maybe even part of your burger.

Sixth, grill. The burgers in the image above are a little more well done than I usually like. It just happened. And we didn't have any tomatoes to top, but the green onions and lettuce were from our garden. With a little bacon, some BBQ sauce and mustard they still tasted soooo good.