Brussels Sprouts with Pecans and Onions 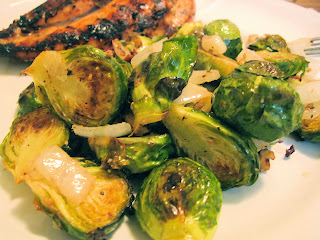 Maybe it's because I came late to brussels sprouts, but I can't get enough of them. Maybe I am making up for lost time.

For those of you who don't understand where I am coming from, I'm sure that there is a way to cook brussels sprouts so that they don't taste good. Probably it was the way your parents prepared them for you when you were little. Maybe you hated them. I say, fair enough. Those brussels sprouts very well could have been nasty. I'm not going to tell you they weren't.

But I am going to tell you that, cooked properly, brussels sprouts are simply phenomenal. I like roasted brussels sprouts so much that I even like them cold, as left overs from the night before. Now, that is not necessarily the ideal way to enjoy these nutritious veggies, but I'm just saying that are THAT good.
(On a side note, why are brussels sprouts so unfairly maligned in popular culture?)

Normally, I follow Amber's recipe: a simple toss-with-olive-oil-and-roast preparation. I love it. The roasting imparts a mellow, nutty flavor and caramelizes the edges into a perfect crunchy sweetness. I don't know why I wanted to try another recipe for brussels sprouts last night, since I am so satisfied with the first, but I decided to get crazy. Maybe it was the pecans. Or the onions.

I do know that I couldn't get rid of the roasting, so I adapted this recipe from Saveur (the best food magazine in existence--and also wonderful to follow on facebook, by the way) to accommodate the roasting process.  This recipe is slightly different than the plain roasting method, but I don't want to say it is better. The pecans and onions compliment the brussels sprouts nicely and make this a particularly great dish for cold fall and winter nights. It kind of gussies them up a little. I'm going to add this into my regular brussels sprouts rotation, because I do love a little variety in my life. Even if it's just in my brussels sprouts.