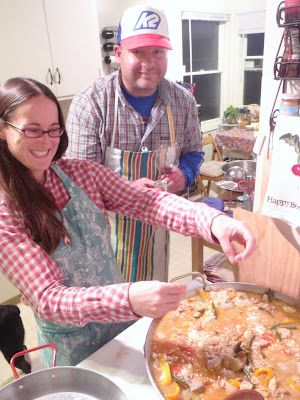 Well, really, it's a paella recipe from Bob who owns a Huerta in Spain, passed along to Chris VonMarschall's family in the 70's. The handwritten copy of the recipe I have has the official title of "Pepe Laverua's Paella". Now, if you're anything like me, you may have viewed paella as a dish left for experts, or people with cash to drop on the special rice and threads of saffron. Not to mention the special pan. I was always down right intimidated, until Von showed me the light by gifting a bag of paella rice to me for my birthday, and coming over to make it with me at my house last week, with friends.
Paella not only is an incredibly delicious dish, but it is actually not that expensive to make, after the initial investment in the pan. It also is a very flexible dish to make, leaving room for creativity in ingredients and preparation. As I stand here in my kitchen making my second batch of paella, ever, I could see how it would be very difficult to make the same paella dish twice. Ngoc also posted a recipe for paella two years ago, and I know it is delicious from personal experience.
Paella is also a very communal dish, seeing as how any batch of paella made in a standard paella pan feeds at least 6 people. Last week we had six friends help make it, and each person brought ingredients. Cooking it together was fun, and sitting around the table serving dinner from a huge pan of paella felt like the ultimate family style dinner. Don't forget the aprons, as it can get a little messy.
Now a word about the equipment and ingredients. If you don't have a paella pan, you can get one fairly cheap at Sur La Table. If you live in the Berkeley area, pick one up at the new restaurant supply store on 7th and Potter, you can get one for $15 or $20. Regarding the rice, do not buy anything less than a traditional paella rice (in other words: no long grained rice). Saffron you can pick up pretty cheap at TJ's or bulk in a natural grocery. Just buy enough for one use, and it will be fresh and less expensive. Any combination of meat and veggies can go in your paella, use what you have on hand. I do not specify quantity of vegetables and meat because it depends on how many people you have and how big your pan is. A proper paella will end with the pan filled to the brim with goodness. For a standard 6 serving pan, at least 2 bell peppers, 2-3 chicken breasts, 4-6 sausages, a couple cans of artichoke hearts...you get the idea. Below are suggested ingredients, but be creative and experiment, it's half the fun! 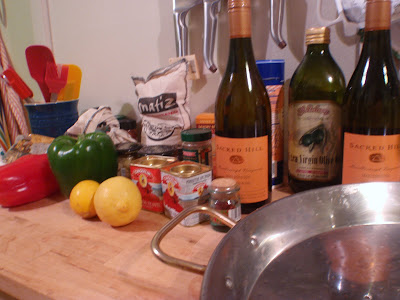 How it's made
Start by heating up your paella pan on your stove top (or outdoor grill), covering the bottom 2/3 with oil. Once oil is hot, stir in salt and dissolve in oil. Add pork/beef and brown in the oil. Add chicken/sausage and brown. Pour in wine to cook meat in. After wine comes to a simmer, add in the onions and add your long cooking vegetables (bell peppers, etc). Stir in garlic cloves. Bring back to a simmer and cook until veggies are tender. Add in the rest of the vegetables and cook a bit longer. Add in wine or stock as needed. Toss in 2 handfuls of rice per person (think of how large your pan is) scattered around the pan. Stir rice in and cook on high heat to 'brown' the rice, stirring often. Add in all spices except saffron. Add enough stock/wine to cover all ingredients and simmer, stirring often. After a bit add in the saffron. Stir in the shrimp/langostinas about 5 minutes before done. Cook until rice is tender and paella is no longer soupy. Put clams/mussels on top, and garnish the top with sliced lemon and pimiento peppers. Cook in the oven at 400 degrees to carmelize the top, for about 10 minutes, until seafood is cooked. Let stand about 10 minutes to rest before serving. Enjoy! 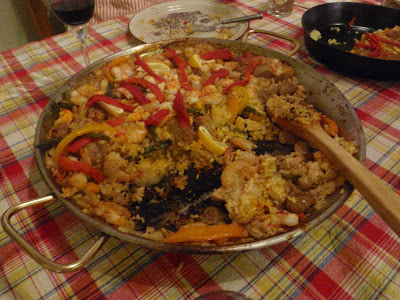 Email ThisBlogThis!Share to TwitterShare to FacebookShare to Pinterest
Labels: paella