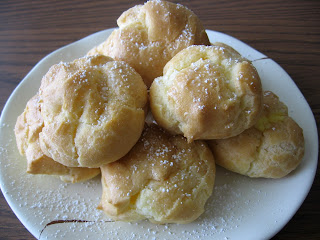 Cream puffs: They are rich, creamy and decadent, but also nicely portioned into snack size bites. Like I have said before, I would have never suspected that one could make cream puffs at home. Yet they are simple and fun to make! And pretty fancy looking, too. 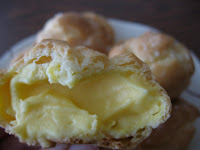 I based the filling listed here on one I found on allrecipes.com. I went to the store looking for white chocolate pudding to use for the filling, but alas they had none. I went with French vanilla instead. It was nice, but I just found the white chocolate flavor on sale at Target, so I had to buy some to try these again. I think the almond (or other flavor) extract is an important addition. My guests were surprised to find out that the filling of these cream puffs was based on a pudding mix. The flavoring makes them seem more homemade.

When I make these again, I am going to try the filling without the whipping cream in the pudding (I'll just use milk). I liked them with it, but I also felt like I could only eat one or two since they were so rich. That being said, I also am looking forward to trying these filled with just whipped cream. I think I'd like the texture of the light and fluffy whipped cream filling in these tasty pastries.