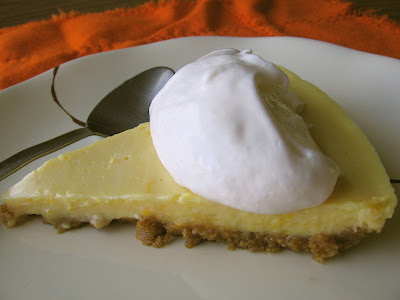 Spring, 2003: A handwritten sign in a downtown Berkeley restaurant window announced, "We buy Meyer lemons." It was the first I'd heard of them and I had no idea what they were. I figured maybe they were a cross between a lemon and a lime. (Nope!) Every time I walked home I saw the sign, but I never ate at the restaurant or looked into the Meyer lemon mystery.

Fast forward to Spring, 2011: As an avid reader of food blogs and magazines, I am hearing about Meyer lemons left and right. People are raving. Desserts abound, but savory dishes do, too. I read recently that Alice Waters brought Meyer lemons from her backyard all they way to a speaking engagement in the Midwest some years back. Oh and by they way, as it turns out a Meyer lemon is more like a cross between a lemon and a mandarin orange. Intriguing.

Though I've been hearing much about them lately, I have yet to see them in the grocery store. Maybe fancy stores carry them, but my neighborhood store does not. Fortunately, I have relatives that live in California. My dad just brought me a big bag of Meyer lemons direct from a California backyard.

As luck would have it, I also happened upon a "creamy lemon pie" recipe. I like this recipe because it is "light" (non-fat sweetened condensed milk, reduced-fat graham crackers and the like), but it does not taste like you've cut any of those corners. It is rich and creamy, sweet and very lemony--or in this case, Meyer lemony (which is marvelously the best flavors of lemons and oranges at the same time, and not too sour either.) Anyone can make a great dessert if you put enough fat and sugar in it, but a guilt-free dessert that doesn't taste guilt-free--now that's really a find. At least in my mind it is.

I'm calling this a tart and not a pie because it just doesn't seem thick enough to be a pie. (I'm sure that's not really how one is able to tell the difference between a pie and a tart, but I'm sticking with it.) The slices look a little on the dainty side, but I swear to you, once you taste this tart you will understand. It makes up in taste what it lacks in bulk. Each bite is so flavorful that you savor it slowly. And anyway, I'd rather have a small slice of something delicious than a big slice of something lackluster.

Oh, and did I mention that this recipe is ridiculously easy? Pretty sure it doesn't get better than that. I made two and froze one for a week. (It was just as good the second time.)